Memory from my childhood: I was about twelve years old, returning pop bottles for the deposits at a Safeway grocery store three blocks from my house in Kansas City. A wrinkled woman, not more than five feet tall, wearing a headscarf and a coat too heavy for the weather — probably someone’s grandmother — wheeled her cart toward the check-out lines. She had quite a bit of food.  I guessed she was shopping for the extended family.

The store was busy, lines at every register. I don’t remember what day of the week it was, but Saturday seems likely. I saw the woman stand still for a couple of minutes, scanning the scene, assessing the lines and then spotting one that was miraculously short. She rolled up to it and began unloading her cart of goods right under the sign that read “Express Lane. 12 items or less.”

I had seen my father and a few other adults plenty angry at different times, usually over some boneheadedness on the part of a kid. We lived in not the best neighborhood. I’d been aware of some outright meanness here and there. I’d experienced and witnessed my share of school bully action. But I had never seen hatred fill someone’s eyes the way I saw it in the store clerk working the express lane.

She was a fortyish woman, midwesternly plump. I’d seen her at school plays, as her daughter attended the same school I did. She’d worked at the store for several years and always seemed, if not chipper, at least polite. Not that day.

It was as if a demon had risen up at register eight. She exploded in fury, veins popping, yelling at the old woman for using the wrong lane. I still have a clear mental image of her pointing at the sign and ranting about the woman trying to cheat, about how her people thought they didn’t have to follow the same rules because of everything that had been handed to them. I remember her spitting out a long, bitter tirade that included the words “America” and “foreigners” and a couple of racial epithets I’d never heard before.

The old granny, meanwhile, scrabbled to put everything back into her cart, bowing her head and repeating probably one of the few English words she knew: “Sorry, sorry, sorry, sorry.”

I’d like to tell you that even though I was but a youth I stood up to the clerk on behalf of the confused Vietnamese refugee. I’d like for the story to include a scene with me saying “Don’t you know she’s someone’s mother, just like you are? Haven’t you seen the news footage of ragged, starving boat people crowded into barely livable conditions, fleeing for their lives?” I’d like to say that other customers were inspired by my compassion and also rallied, kindly guiding the woman to the correct lane and assisting her. But none of that happened. 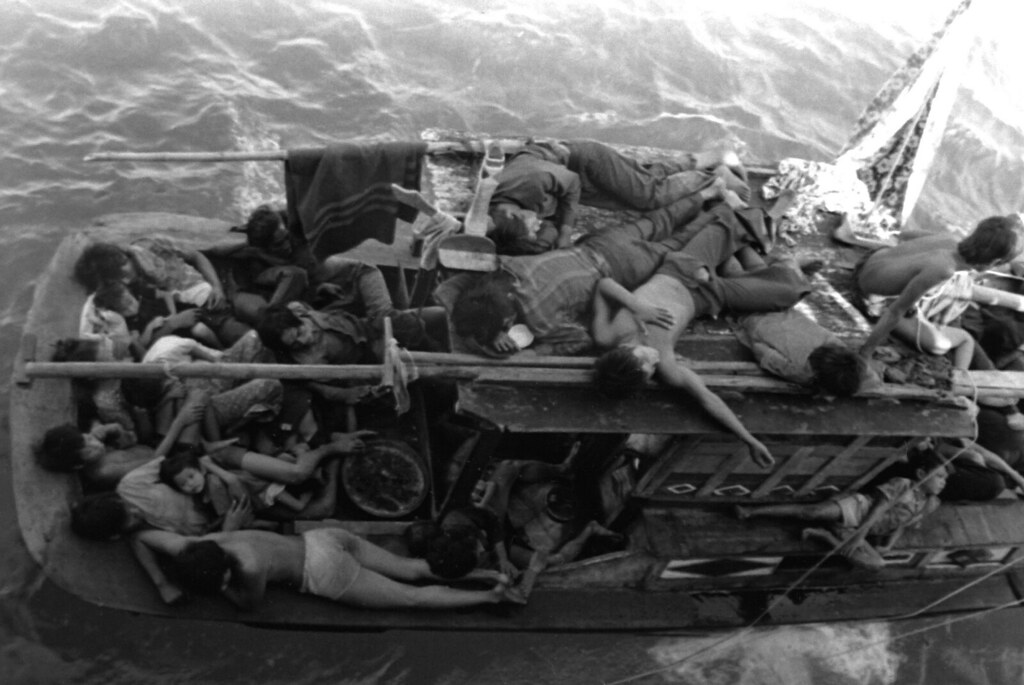 Mostly people tried to ignore the situation. Some of them muttered, either about going back where you came from or saying “She’s doing the best she can. It’s all new to her.” But nobody really defended or helped her.

I still feel about an inch tall when I think how I knew what was right and I did nothing. I was a kid, but old enough I could have at least said a kind word to her. Old enough that I understood how desperate someone must have to be to jump on an overcrowded boat and set out across the ocean hoping you’d someday find somewhere to land that wouldn’t turn you away.

Though that’s the most vivid memory I have of when the refugees came to our neighborhood, it wasn’t an isolated incident. Hate was percolating in advance of their arrival. Kids at school parroted what their parents said at home: “Keep an eye on your pets. They’ll catch your dog and cook it for dinner.” “We have to work for what we have, and now foreigners show up and get everything free.” “They aren’t Christian.” “They’re communists.” “They have too many children, pretty soon they’ll take over the whole area just by having so many kids.” This in a neighborhood with a significant Catholic population. My family wasn’t Catholic, but our six-child family wasn’t outside the norm for the time and place.

I assumed the Vietnamese families were settling in our neck of the urban woods for the same reasons American-born families did. The housing was cheap. I still assume this.

I moved out of the neighborhood in my late teens, and the Vietnamese population had hardly “taken over.” I often saw some of them on the city bus, wearing restaurant or hotel housekeeping uniforms. The name Nguyen accounted for a few rows in my high school yearbooks; Tran took up a handful more spaces. I had a biology lab partner once named Lan, who told me her father was the only child in his family to go to school, as he was the oldest boy. He would be severely disappointed if she brought home any grade other than an A in any class. 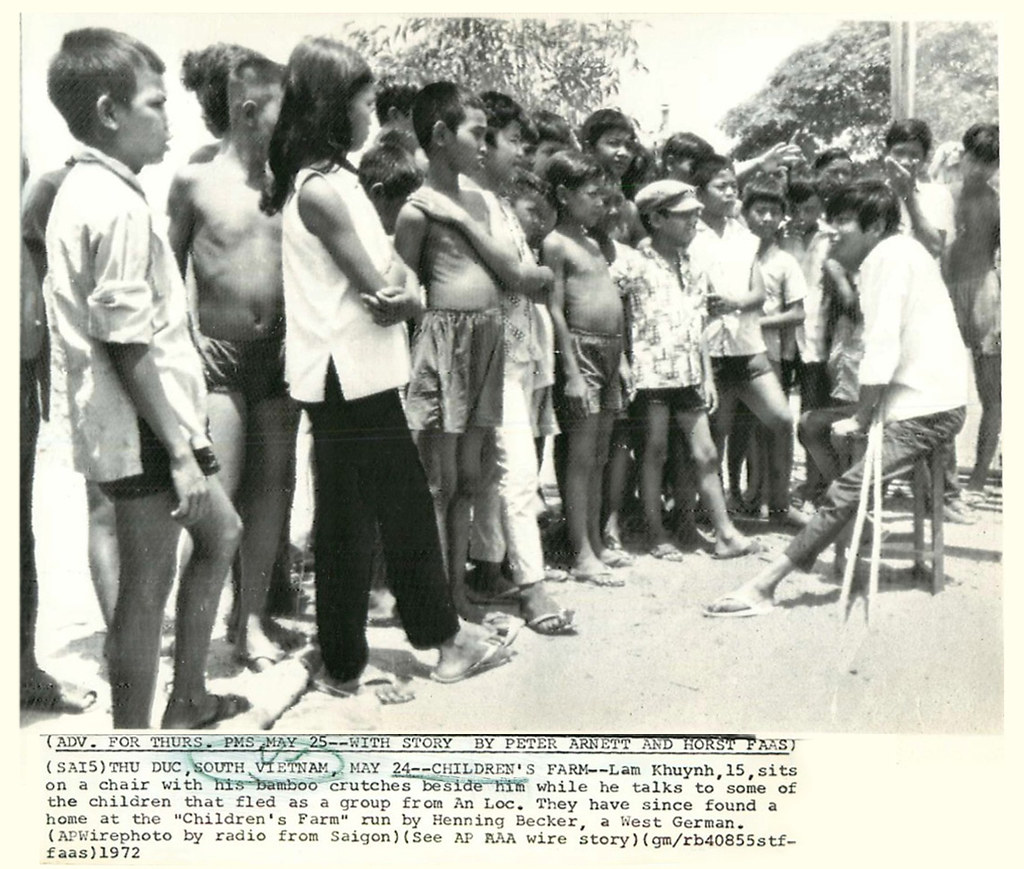 Lan and her family were the poster children for those who advocated giving the refugees a fair chance. Hardworking, humble, smart. There were some Vietnamese students at the other end of the spectrum, too. You’d see them sitting in the detention room every week. Imagine that. It turned out the Vietnamese weren’t all alike, but were all human, like the rest of us.

In hindsight, I bet some of the kids in detention were there for fighting back. The refugee kids got picked on a lot, and not only by students. A history teacher, the one person you’d think would have a broader perspective, used to put his fingers up to the corners of his eyes and pull them into slits when he called a Vietnamese name while taking attendance.

I often wondered if any of my classmates were the grandchildren of the woman in the grocery store. I wasn’t a gregarious kid, so never reached out in a big way to anyone. But I was in the population of students who willingly sat next to Vietnamese kids in class, unlike those who would move across the room. I never made a big speech like I wanted to have made in the grocery store, but my Geometry teacher did one day. He threw math out the window for about ten minutes while he lectured us on treating everyone with respect and talked about how much courage the Vietnamese families showed every day and how much they had achieved, having to learn an entire new language and way of life with almost no resources. I seldom call people out by name on my blog, but I will here. Mr. Bowen, you were a wonderful teacher and a great example for us all.

So, despite my continued repeated vows to myself not to appear argumentative on Facebook, this is why I probably won’t be able to keep my mouth shut if you make a hateful post about refugees. I will try hard to respect your humanity and to understand you’re speaking from fear. But you have much less to fear than those fleeing families do. And I never again want to feel so ashamed of myself as I did that day in Safeway when I was standing right next to someone being abused and publicly humiliated simply for her race and birthplace and all I did was look away. Instead, I want to live up to Mr. Bowen’s expectations.

3 thoughts on “When the Refugees Came, or Why I Can’t Seem to Keep My Mouth Shut on Facebook”